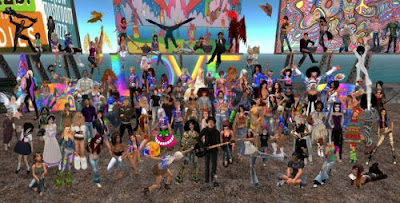 Back in October/November 1010 I began to think about a party that would get all the Forum Dwellers in one place.  So I posted in in SL GD "A forum Dwellers Party?"  Later during more blog posts, and party preparations, the name "Hippiestock" was dubbed. On January the 15, 2011, a forum dwellers party came to pass.   So at Lagrange point the forum dwellers party Hippiestock 2011 was held.  Cries of " I can't get there began to ring out over the Cartel group chat.  Against better advise from Suspiria, I began to kick the sims capacity up. First to 60.  Then to 68  Lagrange Point saw a constant 68 people for over 2 1/2 hours!  Over 100 people attended in round robin fashion.  It turned out to be one of the biggest parties ever in Second Life.  A tradition was started.  To me this tradition is that we lay all of our differences, and snarlling and fighting, aside for just one day, and we all get together as one. If only for just one day.  It is my hope that this tradition will continue over the years.  I want to thank all of you groovy Hippies for making this happen.  A special thanks goes out to Suspiria, and all those that helped make this a far out happening!  Yes!  Far out and groovy!
Peace!
Posted by Hippie Bowman at 12:02 PM

Hippie Bowman
Hudson, Florida, United States
Hi! I am Hippie Bowman. I am a Spacecraft builder in SL, a teacher, and a Slumlord. Come visit the space port anytime. Do a search for Lagrange Point! Peace!